"fearfully And Wonderfully Made"

This is an oil painting entitled, "Fearfully and Wonderfully Made" that I did a few years ago, and which I will be re-doing again this year, and having prints made up. 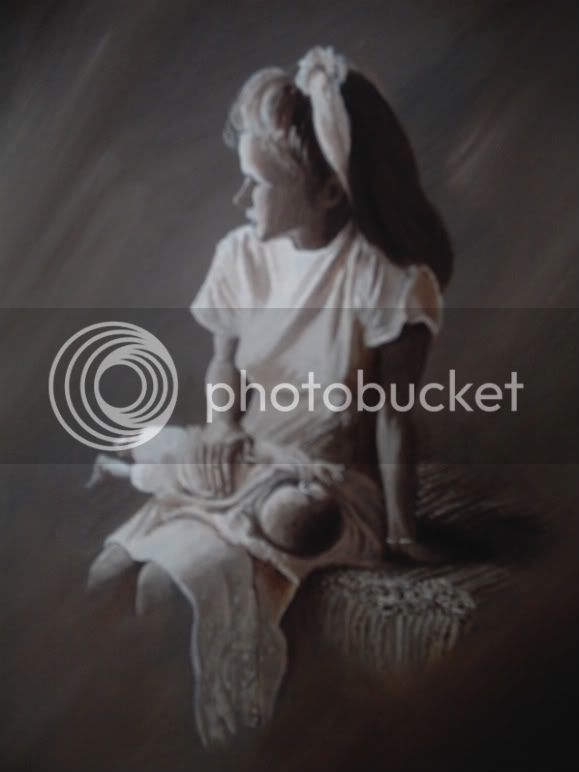 Very nice. Can you tell us more about it? Thank you.

tezriLi said:
Very nice. Can you tell us more about it? Thank you.
Click to expand...

Hmmm...well, when I had my first child, of course as with any other young mother, it was a wondrous time! My mother gave me a book which was a photographic journal of one couple's baby's first year, which was sometime in the late 40's. I loved the black and white photos, and fell in love with the photo I depicted in my portrait above. It just spoke to me. Apparently, the husband snapped a shot of his wife sitting with her baby on her lap, just after the storm of a bout of colic had passed.

I can't find that book, now! I wish I could! There were so many other pics there I could use as inspiration!

For me, I desired to interpret it as a mother, lost in wonder, looking out a window with her tender baby on her lap. I have had many comments from people who have seen it, some with very emotional responses. This is the second one I did---the first I have, but the second one, the best, was given to my sister who has it hanging in her living room. She lives so far away that I cannot just go and borrow it and have prints made, so I plan on repainting the same subject so that I can actually sell them.

I've always been amazed by people that can reflect life on a medium. I used to draw a lot when i was a kid, but I could never get out of the stick-figure stage - even today

tezriLi said:
Super. I hope you can find your book and do all you intended . . . .
Click to expand...

Abdicate said:
I've always been amazed by people that can reflect life on a medium. I used to draw a lot when i was a kid, but I could never get out of the stick-figure stage - even today