It is Php 2:11 which in the English KJV reads:
"And that every tongue should confess that Jesus Christ is Lord, to the glory of God the Father." -Php 2:11 KJV

The KJV is translated from the old Greek texts and the word used for "Lord" use here is Kurios which means "supreme" or "controller" and even "Mr." and is a title even used for Zeus. In the Greek, it is impossible to tell when the Aramaic was referring to the Name of God or a title for a human. Most Christians assume this verse is saying He is human Lord. That is not the case at all in the original Aramaic.

(To see it better, copy this and put it in Word or other text programs and enlarge It)

Here, we find a very interesting word used for Lord.

It is transliterated as Dmry'

The D is actually there in grammar context, for example in Hebrew "Qodesh L'YHWH." The L is for Grammar purposes.

The actual word in Aramaic is


Which is pronounced "Marya" or as most translate it "MarYah."

This is the Aramaic Name of G-d. However, according to the ancient Hebrew texts God's name is spelled with the four Hebrew letters "Yud Hei Waw Hei" which transliterated are "YHWH." So, how is that in Aramaic it be possible when His Name is YHWH? Because in ancient times most were afraid of saying His Name, so they combined His name in Aramaic with "Mara" which means "Lord" or "Master" making it "Marya" (Mem Resh Yud Alef).

It is equivalent in Hebrew with YHWH but is sort of the Aramaic form of "Adonai" which the Hebrew use as a replacement for the Name of God.

How can it be equivalent then? Because it means in Aramaic "Lord YHWH."

Some scholars believe this is why in later Hebrew the word for "God" became plural. Aramaic does not have a plural word for God. In Aramaic, it is Aloha which is equal to in Hebrew with Eloah. In fact, the oldest book of Genesis in existence known as the Yahwist script does not have the word "Elohim" in it at all. Instead, it uses the Name of God "YHWH" which in Aramaic would have used "MarYah." So instead it read "In the beginning, YHWH created the sky and earth..." or "The Lord YHWH"!

The phrase in this verse I want to focus on is:

(Yahshua is the Paleo-Hebrew name of Jesus. In Aramaic, it becomes Y'shua for the same reasons as to why YHWH became Marya. In Hebrew/Aramaic, His name means "YHWH is Salvation" which is why when Mary named Him it says "...JESUS, for he will save his people.")


As I showed, MarYah is equivilant with in Hebrew to YHWH, meaning "Lord YHWH" or simply "YHWH." Therefore this verse now reads:


"and that every tongue should confess that Y'shua the Meshiha is MarYah, to the glory of Aloha the Father."

For ancient language rescoures that are compatable with E-Sword try this page: 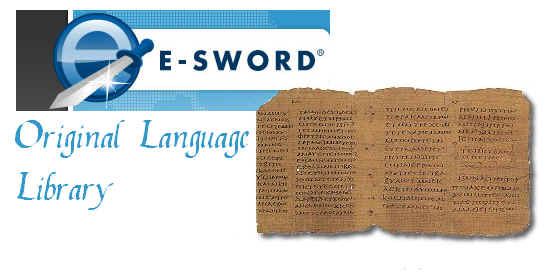 thanks mate! but I don't know nor understand which version to download

the focus of this thread is this

Just a side question that is kinda related to the topic but loosley at best, In your original post it sounds like you're syaing the Aramaic version came first, but didn't the Koine' Greek version come first? I've been taught that although the people of the time in that area were multilingual (speaking Hebrew, Aramaic, and Koine' Greek) and They often spoke in Aramaic, but for important documents they wrote in Koine'. Every pastor and theologist and evangelical person I've spoken to has said the Greek writings came first. This is just a side note to your post, the rest sounds very interesting

I'm not the one who wrote it

and I really don't know Richard which came first but for the 4 gospels I highly doubt that it was Greek, maybe some of Paul's letters could have been Greek. but God knows!
D

Rams .... Thanks for that and I was going to call you professor Rams until you said you didn't wite it ....

check this out ! wow

it's amazing how much more sense it makes when we use the original manuscripts.

I always knew there was something wrong with these Greek translations. the fact that in the old testament there's more reverence towards God, and His name, calling Him: LORD, YAHWEH, JEHOVAH, LORD of Hosts, LORD God, etc.. in the new testament with greek translation it's a simple Lord which makes it seem normal as if it's only a sort of Master but not a supreme ruler.

See, I don't put much faith in people's translations... especially considering there are so few people that can even read/write/speak Aramaic. Only about 400,000 people in the world speak neo-Aramaic which is a far cry from Late Old Western Aramaic, a lot changes in a language in 2000-2200 years. If I were to take any one of you and drop you back in say... 17th century England you'd be very confused with the language they were speaking. Don't believe me? Go read un-translated/un-modernized Shakespeare.