The Islamic Republic of Sudan under international pressure from the International Community have upturned the death-by-hanging sentence passed on Meriam Ibrahim , the christian woman refused to renounce her christian faith.

27 years Meriam Ibrahim , has been sentenced to more than 100 lashes for committing adultery with her own husband , and to be killed by hanging for apostasy after refusing to renounce her Christian faith. 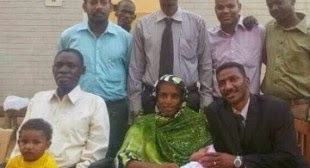 Daniel Wani with wife, family and attorney
Her ordeal led the United States and the international community to mount pressure on Sudan to release her.

Her husband , Daniel Wani, a U.S Citizen said "I'm so happy" to the guardian News London by phone.
He confirmed that his wife and two children are in stable condition , and hoped to relocate them to the United States as soon as possible.
Thanks to her lawyer, Elshareef Mohammed, a Muslim who fought very hard to see her released.

They just arrested her again

They were in the airport to leave and they got her

LanceA said:
They were in the airport to leave and they got her
Click to expand...

Sad.. I think she needs prayers.. From everyone with faith..

LanceA said:
They were in the airport to leave and they got her
Click to expand...