Frankincense is a sweet - smelling gum resin derived from certain Boswellia trees, which at the time of Christ grew in Arabia, India, and Ethiopia. Tradition says that it was presented to the Christ Child by Balthasar, the black King from Ethiopia or Saba. The frankincense trade was at its height during the days of the Roman Empire. At that time this resin was considered as valualble as gems or precious metals. The Romans burned frankincense on their alters and at cremations.

I love your tidbits of information!
We should keep this going with facts about Christ's time on earth, which fascinates me!

Ok Violet..... I'll try to fine more and please you all feel free to add. Thanking you in advance.

The carol " Silent Night" was wrtten in 1818 by an Austrian priest, Joseph Mohr . He was told the day before Chhristmas that the church organ was broken and would not be prepared in time for Christmas Eve. He was saddened by this news and could not think of Christmas without music, so he wanted to write a carol that could be sung by choir to guitar music. He sat down and wrote three stanzas. Later that night the people in the little AUstrian church sang " Stille Nacht " for the first time.
D

Myrrh is an aromatic gum resin which oozes from gashes cut in the bark of a small desert tree known as Commifera Myrrha ot the dindin tree. The myrrh hardens into teardropped shaped chunks and is then powdered or made into ointments or perfumes . This tree is about five to fifteen feet tall and one foot in diameter. Legend says that Casper brought the gift of myrrh fron Europe or Tarsus and placed it before the Christ Child. Myrrh was an extremely valuable commodity during biblical times and was imported from India and Arabia.
D 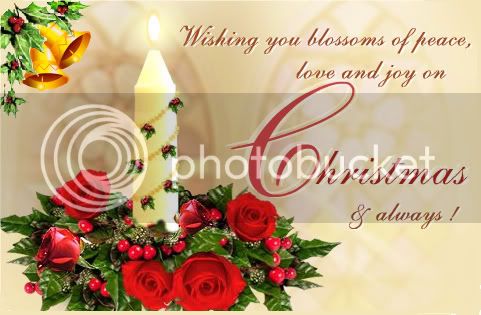 We put up our tree last night.

Instead of using ornaments, we used these little stuffed toys we've been getting out of the claw-machine all year. It looks so neat!

We listened to carols on XM and wrapped the presents we'd bought throughout the year.

Me too Whirlwind. God gave us our first gift, Jesus Christ, His one and only Son. What greater gift is that.? That He laid down His life for us. Hallalujah what a Saviour. !!!

Your tree sounds wonderful. And are there fire balls on it ? ..... LOL
D

In Victorian England , turkeys were popular fior Christmas dinners. Some of the birds were raised in Norfolk and taken to market in London. To get hem to London, the turkeys were supplied with boots made of sacking ot leathers. The turkeys were walked to the market. The boots protected their feet from the frozen mud of the road. Boots were not used for geese; instead , their feet were protected with a covering of tar.
D

dusty original post,which way did the 3 kings follow the star to bethlehem?so where would they come from?
D

smellycat said:
dusty original post,which way did the 3 kings follow the star to bethlehem?so where would they come from?
Click to expand...


Good question Michael. All it says in the Bible is the wise men came from the east and followed the star. They followed the star to Jerusalem where they asked saying they saw the star in the east and when King Herod heard he was troubled and called a meeting of all the leading priests and teachers of the law. He asked them where the Christ would be born and they answered, " In the town of Bethlehem in Judea.. The prophet wrote about this in the scriptures. ( Mic. 5:2 )" But you, Bethlehem, in the land of Judah , you are important among the rulers of Judah. A ruler will come from you. He will be like a shepherd for my people , the Israelites. "
D

[SIZE=+1]
Christmas in England[/SIZE]
[SIZE=-1]The English enjoy beautiful Christmas music. They love to decorate Christmas Trees and hang up evergreen branches.
One England's customs is mummering. In the Middle Ages, people called mummers put on masks and acted out Christmas plays. These plays are still performed in towns and villages.
The English gift giver is called Father Christmas. He wears a long red or green robe, and leaves presents in stockings on Christmas Eve. However, the gifts are not usually opened until the following afternoon.
Christmas in England began in AD 596, when St Augustine landed on her shores with monks who wanted to bring Christianity to the Anglo Saxons.
Father Christmas delivers them during the night before Christmas. The Children leave an empty stocking or pillowcase hanging at the end of the bed. In the morning they hope it will be full of presents.
In England the day after Christmas is called Boxing Day because boys used to go round collecting money in clay boxes. When the boxes were full, they broke them open.
In England Christmas dinner was usually eaten at Midday on December 25, during daylight.
In England, the only thing that people ate on the day before the feast was Frumenty, which is, was a kind of porridge made from corn. Over the years the recipe changed. Eggs, fruit, spice, lumps of meat and dried plums were added. The whole mixture was wrapped in a cloth and boiled. This is how plum pudding began.
In England the traditional Christmas dinner is roast turkey with vegetables and sauces. For dessert it is rich, fruity Christmas pudding with brandy sauce. Mince pies, pastry cases filled with a mixture of chopped dried fruit.
In England also they elect Boy Bishops in commemoration of St. Nicholas compassion for children. These mock bishops were allowed to do the duties of the ecclesiastic except deliver the Mass.
****