There has been an attack in one of the major Indian cities: AFP: Commandos battle Islamist gunmen in Mumbai, over 125 dead

India needs your prayer support.
B

Yet another example of this "relgion of peace"- what a demonic thing.

Islam gives bad people an excuse to do whats in their hearts.
B

Indeed and satan is the father of all lies and murder.
T

I think Islam in itself is a peaceful religion. It is the extremists, like in any belief that give it a bad name.

I think Islam in itself is a peaceful religion.
Click to expand...


Quran: Sutra 47:4 Now when you meet the unbelievers, smite their necks until you overcome them fully.

9:5 Then, when the sacred months are drawn away, slay the idolaters wherever you find them, and take them, and confine them, and lie in wait for them at every place of ambush.

66:73 O Prophet! Strive hard make jihad against the unbelievers and the hypocrites and be adamant with them.

You gotta remember also, these extremists, are usually people that have been brainwashed since birth to believe that all unbelievers should die. Even though the qur'an says do not hurt "people of the book" (Christians: the guys with the bibles). It is really not even Islam, because they are acting out even sometimes against the quran.

Also, I always try to be kind to Islams, even when I try to talk to them about Christ because, in their eyes we were just as bad.. We sent people to fight in the name of God and spread Christianity all around the world...

Also, I always try to be kind to Islams, even when I try to talk to them about Christ because, in their eyes we were just as bad.
Click to expand...

That's a great point, and I agree 100%. ALL are Gods children, all are created in His image and as Christians we must reach out to, teach, forgive, and share the Gospel of Christ with them.

Here's the biggest distinction I see between the two faiths... 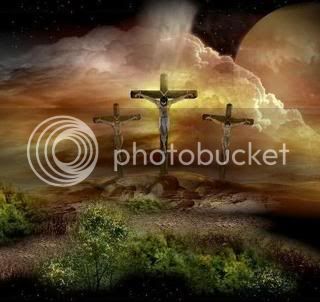 Also, I always try to be kind to Islams, even when I try to talk to them about Christ because, in their eyes we were just as bad.. We sent people to fight in the name of God and spread Christianity all around the world...

Yes, showing the love of Christ is much more winning than Jihad.

Allah was a pagan idol from ancient times and this demon still seeks blood sacrifice.
Are all Muslims bad- no. I personally know some very nice ones but they are not really adhearing to their Koran or they would be killing to.
For a glimpse at the roots of this evil check the link below. There is even a photo of the idol allah:

It is very hard to find non-partisan view on Allah and Islam. Don't worry, I am not switching sides, as it were.
With the ORIGIONAL Meccan religion Allah was a pagan diety, the highest among several. In Pre-Islamic times Allah was indeed that. In Islam, Allah is the word for the the ONE God, creator of the Universe, and the Judge of Mankind. He is unique, inherently one, all-merciful and omnipotent.
It is their word in their language for GOD, even among Arab Christians.

Don't think I am touting the praises for Islam, I am just setting the facts straight. Propaganda abounds on both sides.
B

Allah was an idol , is an idol and always will be an idol.
Yahweh is the one true God. To say that they are the same is sadly uniformed.
Muslims without Christ will never meet the living God except in judgement. If the come to Christ they will have to leave that demon behind.
That was not bashing in that article but archiological fact.

Why Allah cannot be the God of the Bible

Islam's Quran and its own adopted practices prove that Allah cannot be the God of Christianity. In Arabic the word 'Allah' may mean 'god' but that does not mean Allah and the God of the Bible are one and the same. They cannot be because:

I'm not sure what the Catholics have to do with it?

But as a former RC myself, I wouldn't bash any Christian faith, especially the Catholics.

However, if the Catholics were to hyjack our planes, attack us on our own soil, murder over 3,000 innocent men women and children on our own land, start a war without provocation, and all in the name of their god "Allah".

Then we could talk about it more.

But the Catholics havent done that. The Muslims have.
Not propoganda, ...FACT.
B

There is one true God and His Son is Jesus Christ. allah, baal or any other god is a demonic pretender.
L

It will keep increasing and spreading the globe. There's been more Christian blood spilled in this century than in all before, so I am told.

When the lamb opened the fifth seal, I saw under the altar the souls of those who had been slaughtered because of the word of God and the testimony they had given.
They cried out in a loud voice, "Holy and true Sovereign,6 how long will it be before you judge and take revenge on those living on the earth who shed our blood?" Each of them was given a white robe. They were told to rest a little longer until the number of their fellow servants and their brothers was completed, who would be killed as they themselves had been. Rev 6:9-11

Here is the perseverance of the saints who keep the commandments of God and their faith in Jesus. I heard a voice from heaven say, "Write this: How blessed are the dead, that is, those who die in the Lord from now on!" "Yes," says the Spirit. "Let them rest from their labors, for their actions follow them." Rev 14:12-13

Then the kings of the earth and the great men and the commanders and the rich and the strong and every slave and free man hid themselves in the caves and among the rocks of the mountains; and they said to the mountains and to the rocks, "Fall on us and hide us from the presence of Him who sits on the throne, and from the wrath of the Lamb; for the great day of their wrath has come, and who is able to stand?"
Revelations 15:15-17
T

Okey dokey. I need to study more. I stand corrected.

Okey dokey. I need to study more. I stand corrected.
Click to expand...

I love that show!

It is an eye opening experience.
T

thanks for the info thread. i will check it out when the children are not around so I can focus.

You guys have shown me that I have entirely the wrong impression.