"A pedestrian hit me and went under my car."
"The other car collided with mine without giving warning of its intention."
"I had been learning to drive with power steering. I turned the wheel to what I thought was enough and found myself in a different direction going the opposite way."
"Coming home, I drove into the wrong house and collided with a tree I don't have."
"I thought my window was down; but found it was up when I put my hand through it."
"No one was to blame for the accident, but it never would have happened if the other driver had been alert."
"The pedestrian had no idea which direction to go, so I ran over him."
"I saw the slow-moving, sad-faced old gentleman as he bounced off the hood of my car."
"I had been driving for 40 years when I fell asleep at the wheel and had an accident."
"I was taking my canary to the hospital. It got loose in the car and flew out the window. The next thing I saw was his rear end, and there was a crash."
"I was backing my car out of the driveway in the usual manner when it was struck by the other car in the same place where it had been struck several times before."
"The indirect cause of this accident was a little guy in a small car with a big mouth."
"The accident happened when the right door of a car came around the corner without giving a signal."
"I was thrown from my car as it left the road. I was later found in a ditch by some stray cows."
"I had been shopping for plants all day and was on my way home. As I reached an intersection, a hedge sprung up, obscuring my vision."
"I was on the way to the doctor with rear end trouble when my universal joint gave way causing me to have an accident."
"I was sure the old fellow would never make it to the other side of the road when I struck him."
"I told the police that I was not injured, but on removing my hat, I found that I had a fractured skull."
"My wench slipped, losing my balance, and I hurt my back."
"I was unable to stop in time, and my car crashed into the other vehicle. The driver and passengers then left immediately for a vacation with injuries."
"To avoid hitting the bumper of the car in front, I struck the pedestrian."
"The accident occurred when I was attempting to bring my car out of a skid by steering it into the other vehicle."
"When I could not avoid a collision, I stepped on the gas and crashed into the other car."
"I collided with a stationary truck coming the other way."
"In my attempt to kill a fly, I drove into a telephone pole."
"My car was legally parked as it backed into the other vehicle."
"As I approached the intersection, a stop sign suddenly appeared in a place where no stop sign had ever appeared before. I was unable to stop in time to avoid the accident."
"The telephone pole was approaching fast. I was attempting to swerve out of its path when it struck my front end."
"A truck backed though my windshield and into my wife's face."
"I pulled away from the side of the road, glanced at my mother-in-law, and headed over the embankment."
"The guy was all over the road. I had to swerve a number of times before I hit him."
"An invisible car came out of nowhere, struck my vehicle, and vanished."
M

My throat is soar from laughing, thanks for that. I don't know if they should be this funny to me I can't stop laughing. Just the way most of them come accross...

My wench slipped, losing my balance, and I hurt my back."
Click to expand...

I wonder what his wench was up to!!!

pulled away from the side of the road, glanced at my mother-in-law, and headed over the embankment."
Click to expand...


I'm sure he's not the first person that's happened to!!

Staff member
Senior Moderator
Staff Trainer
The comedian, George Carlin, a master of sarcasm, once remarked that every time there is a traffic accident, police always ask the same question whether the cause was obvious or not; "What Happened?"

A cab driver just dropped off a customer and was merging back into traffic by looking in his rear view mirror when he ran over and killed a pedestrian. When the police arrived, the poor fellow was still under the taxi and the officer asked, "What happened?"

The taxi driver said, "Well, ya see, it was this way - the guy seemd to be homeless and cold, so I figured I'd cover him up with the cab."

I'm sure THAT made points with the police...

I really liked this one..

"The telephone pole was approaching fast. I was attempting to swerve out of its path when it struck my front end."
Click to expand...

Heh Ping I see you are a Star Gate fan!

Boanerges said:
Heh Ping I see you are a Star Gate fan!

Boanerges said:
Heh Ping I see you are a Star Gate fan!

This one grabbed me

The guy was all over the road. I had to swerve a number of times before I hit him."

It's a really fun sci-fi show that is based on a 1994 Kurt Russel movie of the same name.
Here is a wiki link for it. Stargate SG-1 - Wikipedia, the free encyclopedia

Thanks Ping.... I guess that's why I never watched it cause it is science fiction.
M

I don't watch Stargate, but I own a P90 like they use: 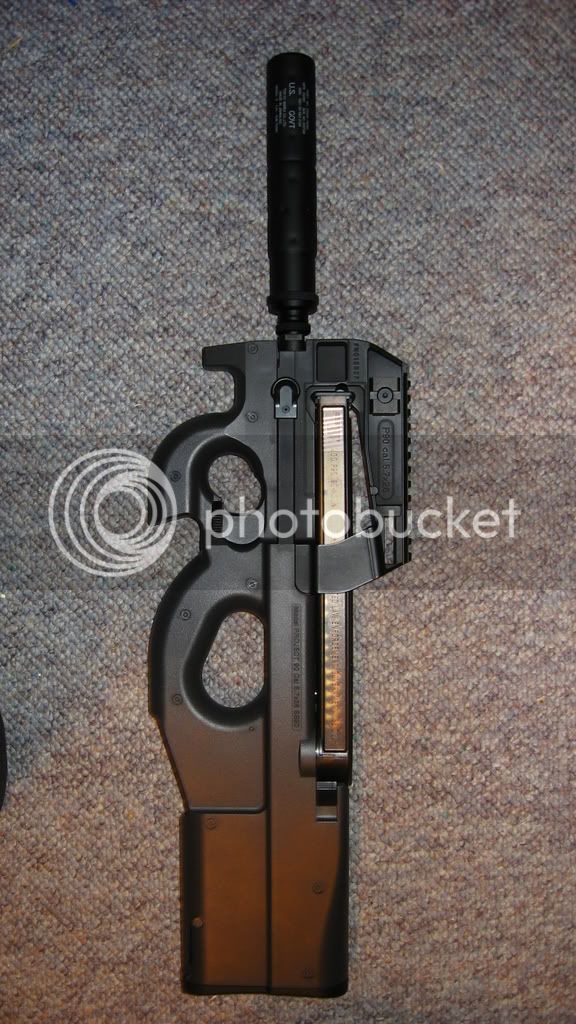 A stapler for insurance forms?