Review of Girl with a Pearl Earring

Review of Girl with a Pearl Earring 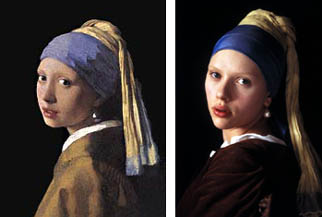 Though I have never read the book, Tracy Chevalier's fictional account of Johannes Vermeer's famous Girl with a Pearl Earring, I did see the big screen adaption of the movie and was thoroughly impressed. Movies about art are few and far between, and if it is based on some artist, it is usually dull, flat, and stereotypical.

What was so interesting about the movie was the fact that it delved into the mind of the artist and the painting, instead of having a story about the painting but not the person who painted it. Sometimes paintings become so famous we forget they just didn't fall out the sky - someone had to do that, believe it or not!

Johannes Vermeer was probably, one of the greatest painters during the Dutch Golden Age, along with Rembrandt. His quiet, elegant, and simple paintings capture the beauty of life in a way the breathes a new breath into art. Where Da Vinci's Mona Lisa is the titular portrait of an elegant woman (I have seen this painting in real life and it much smaller than you would think), Michelangelo's David captures the strength and elegance of men, or Caravaggio made us appreciate the Italian style, Vermeer's art started a genre all by itself. His paintings were never loud, but quiet. Most featured women, reading, playing music, and most of the outfits were the same.

Vermeer seemed to, instead of paint a potrait of someone, seemed to capture light in the ultimate stillness without losing its vibrancy. When looking at a Vermeer painting, you can actually imagine these people being real people, not a woman standing in a room. This would be a difficult feat for anyone to capture completely in a film, as film versus a painting are two completely different things, but when brought together, create terrific results.

Scarlett Johannsen as Griet, the fictional maid of Vermeer who would sit down for his famous portrait, is convincing, but in reality she is very far from the real thing - even the director Peter Webber stated this. However, in movement, she could be the girl with the pearl earring, but sitting still, she isn't. Colin Firth as Vermeer was impressive - he was an artist, and I am speaking this from being an artist myself. He was absorbed in his world, and he knew what he liked.

There was a slight interest between Vermeer and Griet, but in a different way. It was more utter fascination for the man whose world was seductive, quiet, and beautiful. His world was unreachable, yet when she finally got a taste of it she found it completely different from what she expected. Cillian Murphy as Griet's other love interest, Pieter, should have had been given more time on screen than what was handed out. He was an interesting and intriguing man. Tom Wilkinson as Vermeer's patron, Van Rujiven, was completely convincing as a man aging with old desire for the young.

Is there a story behind the movie? Not really. It is almost reflection like, as if we are looking back on someone's memories. More or less, the movie is voyeuristic - you are like a spirit hovering around in the background watching someone else's life play out. Is the movie interesting? Yes. That voyeur-like quality is attractive, and the movie is sumptously beautiful and has rewatchability. Alexandre Desplat's score is to die for, and suits the quiet tensions between Vermeer and Griet perfectly, and also heightens 16th century Holland.

Is the movie historically accurate? Not at all, if you are talking about whether or not the sitter for the painting was a maid named Griet. Don't take this one as fact, because most likely Vermeer's wife Catharina (Essie Davis - might I say she was really beautiful here) was never the jealous type who knew little about his works, and that it is highly unlikely a maid posed for the painting, so on and so forth. It is a good movie to watch if you want an interesting side story to it, but as said above - this movie is 100% pure fiction.

The movie is kind of slow and quiet, and if you are looking for something fast-paced and edge-of-your-seat type, you will not find it here. The movie is subtle in all the ways Vermeer is, which is what I liked. It is seductive in that you almost seem to be there, it is so life like.

IMDB said this ... glad I checked. Hollywood should get no approval for movies like this -

Adult theme (lust) with strong sexual undercurrent, but no nudity.

In one scene, a male and female character have sex against a barn pole. There is thrusting and heavy breathing, but it's not very graphic.
N

I don't remember any sex scenes in the movie.

And secondly, this movie is a beautiful work. I wouldn't let something like this stop me from seeing it. The movie is quiet and simple. I have also read the book, and it is really an enjoyment from what is shown today. Some might call it boring, but I find it enchanting, because it is so much similar to my own world - a world of beauty.


0nu11 said:
IMDB said this ... glad I checked. Hollywood should get no approval for movies like this -

Adult theme (lust) with strong sexual undercurrent, but no nudity.

In one scene, a male and female character have sex against a barn pole. There is thrusting and heavy breathing, but it's not very graphic.
Click to expand...