Times Of Turmoil: A Christian Thriller 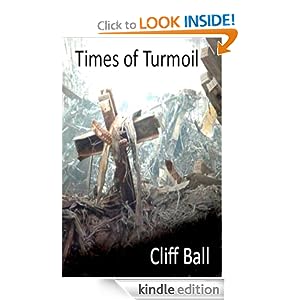 My new Christian thriller, Times of Turmoil, has been released in the Kindle format and is now available exclusively in the Amazon store. For two weeks, the novel will be $.99 as a special book launch price, otherwise, its normal price will be $4.99. It is also free to borrow for Amazon Prime Members. A paperback version will be available soon.

In this prequel to Times of Trouble and Times of Trial, we follow how the Evans family gained their riches and eventually their power to influence events in the United States. We see important events that the Evans family gets themselves involved in, such as the return of the Israelites to Israel, the assassination of President Kennedy, the terrorism of 9/11, and eventually events that lead to gun control and other types of government tyranny in the United States.

The novel also follows the Atwood family, starting with the Great-Grandfather of Brian, Charles, as he fights in World War Two at Normandy and ends up helping his Division liberate Buchenwald shortly near the end of the war. Charles returns to Virginia and gets married to the love of his life, Betty. Eventually, the family ends up in Delaney, Nebraska, where we watch Aaron, the father of Brian, join the Army to fight the Taliban in Afghanistan after 9/11. Later on, we get to see how Brian and Lynda finally get together and get married.

Times of Turmoil is available through:
Amazon US, Amazon UK, Amazon Canada