This is a interesting development...

"The UN has called for international help to fight huge swarms of desert locusts sweeping through east Africa.

A spokesman for the UN's Food and Agricultural Organisation (FAO), called for aid to "avert any threats to food security, livelihoods, malnutrition".

Ethiopia, Kenya and Somalia are all struggling with "unprecedented" and "devastating" swarms of the food-devouring insects, the FAO has said.

The agency fears locust numbers could grow 500 times by June.

Ethiopia and Somalia have not faced an infestation on this scale for 25 years, while Kenya has not seen a locust threat this size for 70 years, the FAO said earlier this week. South Sudan and Uganda are also at risk if the swarms continue to grow and spread." Massive locust swarms spark UN appeal for help

"Swarms of locusts in east Africa have devastated crops and sent a passenger plane off course, and now the UN is warning that without international intervention the voracious insects threaten the food security of tens of millions of people." ‘Unprecedented’ Swarms of Locusts Are Devouring Crops and Slamming Into Planes in East Africa
Reactions: chili

Somewhere along the line, people have misused the land. Locust swarms and insect predation don't happen at random. If all the birds had died due to cutting down trees and now have no homes, who eat the locusts, then these things are going to happen. If people plant all one crop only insects are going to multiply.

It's not the insects to blame. What there needs to be is sustainable agriculture i.e permaculture methods being taught where people grow food.You can actually eat locusts. Makes a good snack.
Reactions: chili

The hoppers eat the food we eat the hoppers. They pretty good after you roast em

Looks like the locust have spread to the Middle East, as it has hit Iran..

"Iran afflicted by large swarms of desert locusts, amid coronavirus woes
'The density of locusts in the swarms is so high that a 10 to 15-centimeter layer of dead locusts forms on the ground after spraying pesticides.'.. 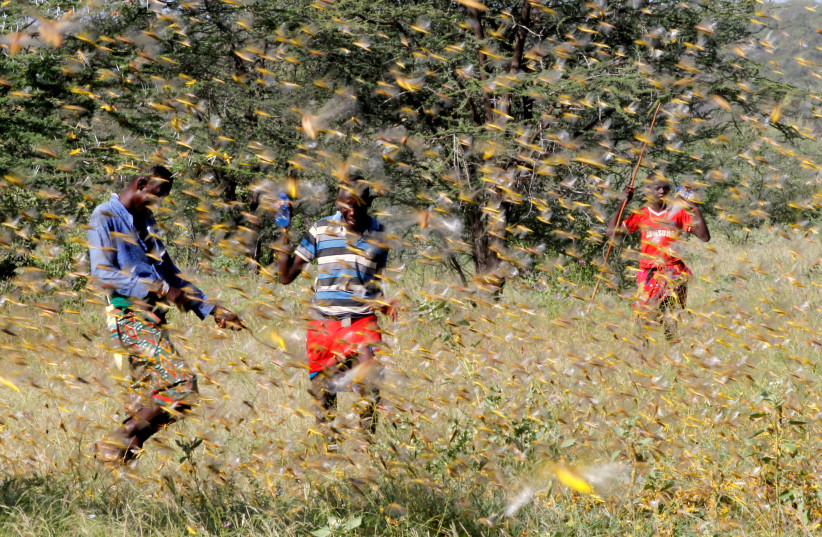 'The density of locusts in the swarms is so high that a 10 to 15-centimeter layer of dead locusts forms on the ground after spraying pesticides.'

chili said:
The hoppers eat the food we eat the hoppers. They pretty good after you roast em

Do you put hot sauce or salsa on them??????
Reactions: chili

Hot sauce for dippin and salsa for a big mouth full. Thank you Jesus for this gift we are about to receive from your bounty. Amen
Reactions: Major

Well they can't eat them now they've been poisoned with pesticides.
So silly!
Reactions: AtomicSnowflake

At least 20 million people are in danger as scientists and governments rush to bring the insects under control"... 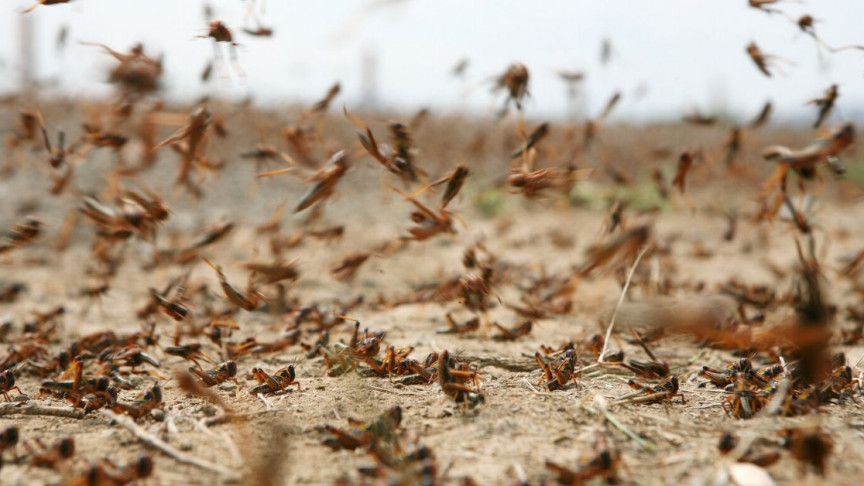 Massive swarms of locusts have swept through Saudia Arabia, East Africa, and Asia.

You can't control the insects what they need to do is get some birds in to eat them.

Of course, if they've already killed all the birds homes and posoined the insects that ain't gonna happen. Sometimes I shake my head at how stupid people can be.

Latest on this..
Science News
New, larger wave of locusts threatens millions in Africa
Billions of the young desert locusts are winging in from breeding grounds in Somalia in search of fresh vegetation springing up with seasonal rains.

Weeks before the coronavirus spread through much of the world, parts of Africa were already threatened by another kind of plague, the biggest locust outbreak some countries had seen in 70 years.

Now the second wave of the voracious insects, some 20 times the size of the first, is arriving. Billions of the young desert locusts are winging in from breeding grounds in Somalia in search of fresh vegetation springing up with seasonal rains.

Millions of already vulnerable people are at risk. And as they gather to try to combat the locusts, often in vain, they risk spreading the virus — a topic that comes a distant second for many in rural areas.

It is the locusts that “everyone is talking about,” said Yoweri Aboket, a farmer in Uganda. “Once they land in your garden they do total destruction. Some people will even tell you that the locusts are more destructive than the coronavirus. There are even some who don’t believe that the virus will reach here.”...

Send more birds to eat the locusts.
I recommend ducks.

The thing is, that it might be more than just some locust going about...
2 Chronicles 7:13-14 King James Version (KJV)
13 If I shut up heaven that there be no rain, or if I command the locusts to devour the land, or if I send pestilence among my people;
14 If my people, which are called by my name, shall humble themselves, and pray, and seek my face, and turn from their wicked ways; then will I hear from heaven, and will forgive their sin, and will heal their land.
Reactions: CoffeeDrinker

Hobie said:
The thing is, that it might be more than just some locust going about...
2 Chronicles 7:13-14 King James Version (KJV)
13 If I shut up heaven that there be no rain, or if I command the locusts to devour the land, or if I send pestilence among my people;
14 If my people, which are called by my name, shall humble themselves, and pray, and seek my face, and turn from their wicked ways; then will I hear from heaven, and will forgive their sin, and will heal their land.
Click to expand...

Below is chapter 1 of Joel.
Joel 1
1 The word of ADONAI that came to Yo'el the son of P'tu'el:
2 "Hear this, you leaders! Listen, all who live in the land! Has anything like this ever happened in your days, or in your ancestors' days?
3 Tell your children about it, and have them tell it to theirs, and have them tell the next generation.
4 What the cutter-worms left, the locusts ate; what the locusts left, the grasshoppers ate; what the grasshoppers left, the shearer-worms ate.
5 Wake up, drunkards, and weep! wail, all you who drink wine, because the juice of the grape will be withheld from your mouth.
6 For a mighty and numberless nation has invaded my land. His teeth are lion's teeth; his fangs are those of a lioness.
7 He has reduced my vines to waste, my fig trees to splinters - he plucked them bare, stripped their bark and left their branches white."
8 Lament like a virgin wearing sackcloth for the husband of her youth!
9 Grain offering and drink offering are cut off from the house of ADONAI. The cohanim are mourning, those who are serving ADONAI.
10 The fields are ruined, the ground is grieving; for the grain is ruined, the new wine dried up, and the olive oil is wretched.
11 Despair, you farmers; lament, vinedressers, over the wheat and the barley - the harvest from the fields is lost.
12 The vines have withered, the fig trees wilted, also the pomegranate, date-palm and apple tree - all the trees in the fields have withered, and the people's joy has withered away.
13 Cohanim, put on sackcloth, and weep! Wail, you who serve at the altar! Come, lie in sackcloth all night long, you who serve my God! For the grain offering and drink offering are withheld from the house of your God.
14 Proclaim a holy fast, call for a solemn assembly, gather the leaders and all who live in the land to the house of ADONAI your God, and cry out to ADONAI,
15 "Oh no! The Day! The Day of ADONAI is upon us! As destruction from Shaddai it is coming!
16 The food is cut off before our very eyes, also joy and gladness from the house of our God.
17 The seed-grain is rotting in its furrows; the granaries are deserted, the barns in ruins; because the grain has withered.
18 How the animals groan! The herds of cattle are perplexed, because they have no pasture. The flocks of sheep bear the punishment, too.
19 ADONAI, I cry out to you! For the fire has consumed the pastures in the desert, and the flame set ablaze all the trees in the fields.
20 Even the wild animals come to you, panting, because the streambeds have dried up, and fire has consumed the pastures in the desert."

This happened in the thirties in the midwest dustbowls of America. The locusts or grasshoppers came and cleaned them out, and the wind blew all their top soil away.

What happened was the white settlers took over the native american Indian's land. They tried to farm it when it shouldn't have been disturbed. They ploughed it up for wheat to sell to Russia got bonanza crops but then the drought came, prices dropped and so they abandoned it.

It should have been left as grassland prairie for the buffalos to graze. Now they get irrigated water in from somewhere else, but that's drying up the rivers as well.